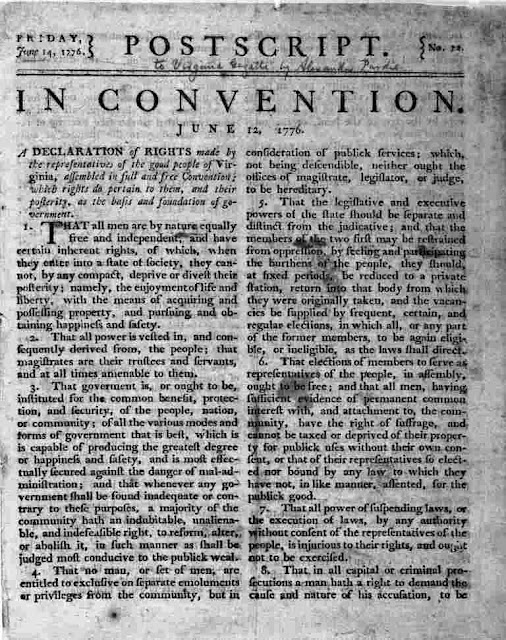 The  Virginia Declaration of Rights, originally written by George Mason and amended by Thomas Ludwell Lee in May 1776, was proposed by the Report of Official Committee on June 1st, 1776.  The original draft contained 18 paragraphs.   The Committee's draft was published in the Virginia Gazette on June 1st with the first unnumbered paragraph appearing as follows:


"A Declaration of Rights made by the Representatives of the Good people of Virginia, assembled in full and free convention; which rights do pertain to us and our posterity, as the basis and foundation of government."

It appeared in the Pennsylvania newspapers of June 6, 8, and 12th and in the Maryland Gazette of June 13,  preceded by the following paragraph:


"The following declaration was reported to the Convention by the committee appointed to prepare the same and referred to the consideration of a committee of the whole convention; and in the meantime, is ordered to be printed for the perusal of the members."

This Declaration that was "printed for the perusal of the members," was sent out to newspapers in all the British colonies.  The first line of the first paragraph of the Committee draft, was widely copied in America and France  "That all men are born equally free and independent "  while the first line of the first paragraph as revised in the official draft, "That all men are by nature equally free and independent," appears in no contemporary printings outside Virginia.  This official draft, adopted June 12th, contains only sixteen paragraphs.


Students and Teachers of US History this is a video of Stanley and Christopher Klos presenting America's Four United Republics Curriculum at the University of Pennsylvania's Wharton School. The December 2015 video was an impromptu capture by a member of the audience of Penn students, professors and guests that numbered about 200. - Click Here for more information


In fact the official draft was virtually unknown  beyond the limits of Virginia for fifty years after its adoption.  It was the Committee draft that was widely copied elsewhere.  The Draft was also the one translated into french and published in France by Benjamin Franklin 1778 and in numerous  editions thereafter. The official June 12th, 1776 draft was never published in a bound book with other American Constitutions until it appeared in an obscure Winchester, Virginia edition in 1811.


Thomas Jefferson drew heavily from this document when he drafted the Declaration of Independence one month later. Mason wrote that

"all men are born equally free and independant [sic], and have certain inherent natural rights,...among which are the Enjoyment of Life and Liberty, with the Means of acquiring and possessing Property, and pursueing [sic] and obtaining Happiness and Safety."


We hold these truths to be sacred & undeniable; that all men are created equal & independent  that from that equal creation they derive rights  inherent & inalienable, among which are the preservation of life, & liberty, & the pursuit of happiness.

This uniquely influential document was also used by James Madison in drawing up the Bill of Rights (1789) and the Marquis de Lafayette in drafting the French Declaration of the Rights of Man (1789).

I That all men are by nature equally free and independent, and have certain inherent rights, of which, when they enter into a state of society, they cannot, by any compact, deprive or divest their posterity; namely, the enjoyment of life and liberty, with the means of acquiring and possessing property, and pursuing and obtaining happiness and safety.

II That all power is vested in, and consequently derived from, the people; that magistrates are their trustees and servants, and at all times amenable to them. 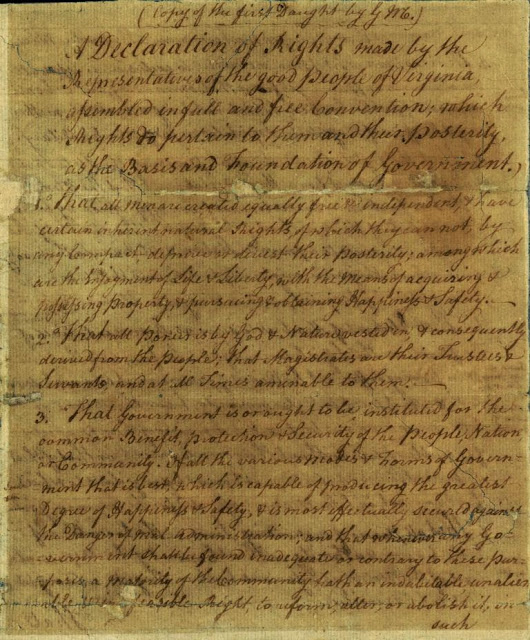 III That government is, or ought to be, instituted for the common benefit, protection, and security of the people, nation or community; of all the various modes and forms of government that is best, which is capable of producing the greatest degree of happiness and safety and is most effectually secured against the danger of maladministration; and that, whenever any government shall be found inadequate or contrary to these purposes, a majority of the community hath an indubitable, unalienable, and indefeasible right to reform, alter or abolish it, in such manner as shall be judged most conducive to the public weal.

IV That no man, or set of men, are entitled to exclusive or separate emoluments or privileges from the community, but in consideration of public services; which, not being descendible, neither ought the offices of magistrate, legislator, or judge be hereditary.

V That the legislative and executive powers of the state should be separate and distinct from the judicative; and, that the members of the two first may be restrained from oppression by feeling and participating the burthens of the people, they should, at fixed periods, be reduced to a private station, return into that body from which they were originally taken, and the vacancies be supplied by frequent, certain, and regular elections in which all, or any part of the former members, to be again eligible, or ineligible, as the laws shall direct.

VI That elections of members to serve as representatives of the people in assembly ought to be free; and that all men, having sufficient evidence of permanent common interest with, and attachment to, the community have the right of suffrage and cannot be taxed or deprived of their property for public uses without their own consent or that of their representatives so elected, nor bound by any law to which they have not, in like manner, assented, for the public good. 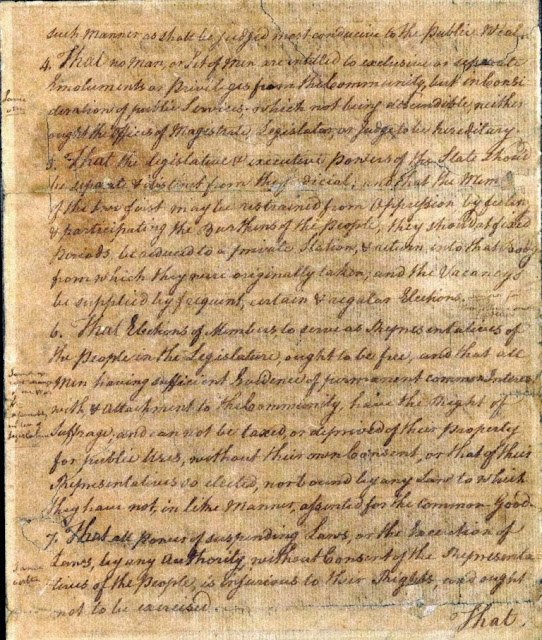 VII That all power of suspending laws, or the execution of laws, by any authority without consent of the representatives of the people is injurious to their rights and ought not to be exercised.

VIII That in all capital or criminal prosecutions a man hath a right to demand the cause and nature of his accusation to be confronted with the accusers and witnesses, to call for evidence in his favor, and to a speedy trial by an impartial jury of his vicinage, without whose unanimous consent he cannot be found guilty, nor can he be compelled to give evidence against himself; that no man be deprived of his liberty except by the law of the land or the judgement of his peers.

IX That excessive bail ought not to be required, nor excessive fines imposed; nor cruel and unusual punishments inflicted.

X That general warrants, whereby any officer or messenger may be commanded to search suspected places without evidence of a fact committed, or to seize any person or persons not named, or whose offense is not particularly described and supported by evidence, are grievous and oppressive and ought not to be granted.

XI That in controversies respecting property and in suits between man and man, the ancient trial by jury is preferable to any other and ought to be held sacred.

XII That the freedom of the press is one of the greatest bulwarks of liberty and can never be restrained but by despotic governments.

XIII That a well regulated militia, composed of the body of the people, trained to arms, is the proper, natural, and safe defense of a free state; that standing armies, in time of peace, should be avoided as dangerous to liberty; and that, in all cases, the military should be under strict subordination to, and be governed by, the civil power. 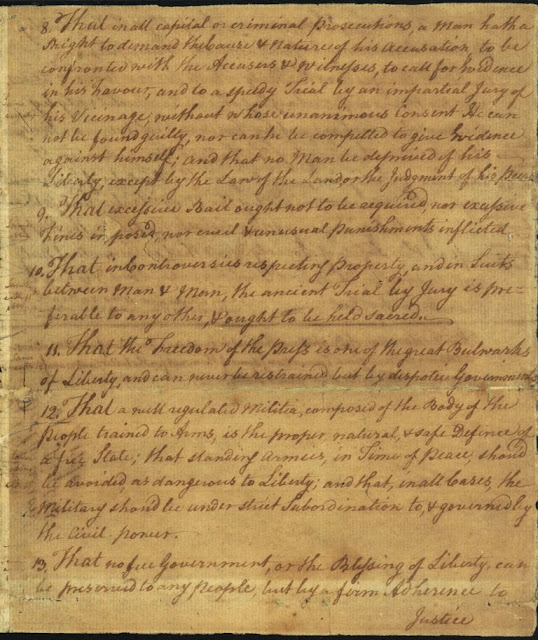 XIV That the people have a right to uniform government; and therefore, that no government separate from, or independent of, the government of Virginia, ought to be erected or established within the limits thereof.

XV That no free government, or the blessings of liberty, can be preserved to any people but by a firm adherence to justice, moderation, temperance, frugality, and virtue and by frequent recurrence to fundamental principles.

XVI That religion, or the duty which we owe to our Creator and the manner of discharging it, can be directed by reason and conviction, not by force or violence; and therefore, all men are equally entitled to the free exercise of religion, according to the dictates of conscience; and that it is the mutual duty of all to practice Christian forbearance, love, and charity towards each other. 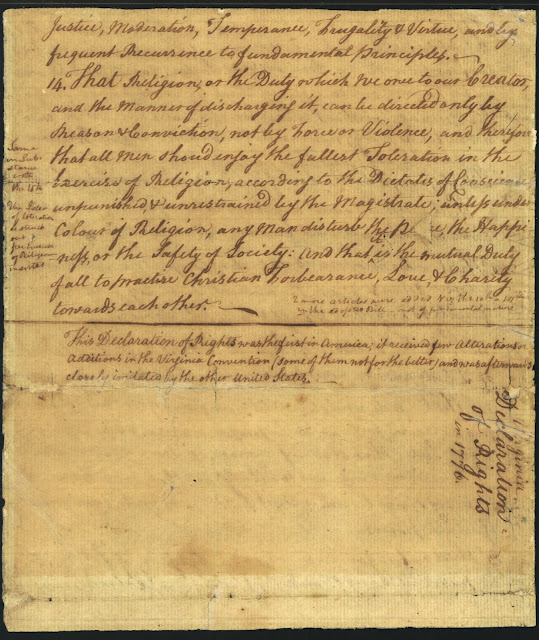 Capitals of the United States and Colonies of America

Book a primary source exhibit and a professional speaker for your next event by contacting Historic.us today. Our Clients include many Fortune 500 companies, associations, non-profits, colleges, universities, national conventions, pr and advertising agencies. As the leading exhibitor of primary sources, many of our clients have benefited from our historic displays that are designed to entertain and educate your target audience. Contact us to learn how you can join our "roster" of satisfied clientele today!

Primary Source exhibits are available for display in your community. The costs range from $1,000 to $35,000 depending on length of time on loan and the rarity of artifacts chosen.

Capitals of the United Colonies and States of America

No Taxation Without Representation

US Bill of Rights

*Republican Party - - is a defunct political party organized by Thomas Jefferson and James Madison in 1791. The Party went out of existence over the schism between John Quincy Adams and Andrew Jackson (both Republican candidates) over the Presidential election of 1824. Today, for the sake of expediency, political scientists incorrectly refer to it as the Democratic-Republican Party. Party members throughout its existence never utilized the name “Democratic-Republican.”

*** President of the Confederate States of America